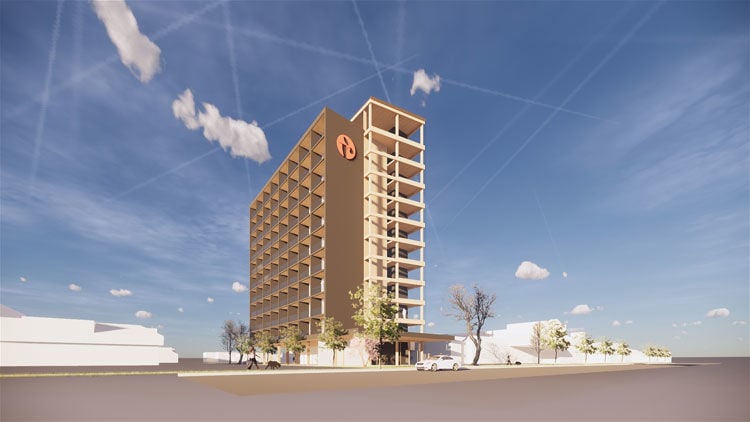 Kelowna’s Ramada hotel plans to build a 12-storey, 83-room wood-frame addition that looks like this. 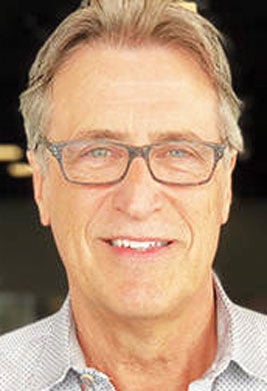 Kelowna’s Ramada hotel plans to build a 12-storey, 83-room wood-frame addition that looks like this.

The hotelier is advocating Kelowna’s first wood-frame highrise, a 12-storey, 83-room addition to the 125-room Ramada hotel at Highway 97 and Dilworth Drive.

“It’s always best to be first,” said Prystay with a laugh. “Nobody remembers second.”

RPB Hotels & Resorts, which owns the Ramada in Kelowna and the Penticton Lakeside Resort, plans to apply for a development permit from the City of Kelowna on Dec. 20.

If all goes well, construction could start in the summer of 2020.

Because mass-timber towers can be built more quickly than highrises made with concrete and steel, the Ramada expansion could be finished by the end of 2021 or early 2022.

Building codes that previously restricted wood-frame buildings to four storeys were amended to stretch to six storeys a few years ago.

This year, Kelowna was one of 13 B.C. municipalities to become early adopters of the National Building Code that will allow mass-timber towers to soar to 12 floors.

However, he wouldn’t name names.

Now we know one of the projects is the Ramada expansion with Penticton-based Greyback Construction as general contractor, Structurlam of Penticton supplying the mass-timber building materials and Penticton-based Robert Cesnik of HDR Architecture designing the tower.

“Besides looking good, mass timber sequesters carbon and is more environmentally friendly than concrete and steel. Wood is a renewable resource, and using B.C. wood is a buy-local strategy that helps the forestry industry, which is struggling right now.”

Prystay is the general manager at the Penticton Lakeside Resort, and he oversaw the building of the resort’s mass-timber six-storey West Wing a few years ago with Greyback and Structurlam.

With such experience, he’ll work again with Greyback and Structurlam on the Ramada tower in Kelowna.

The key to building this new style of highrise is using mass timber for floor plates, structural posts and beams, and for elevator shafts.

Mass timber is created by gluing or nailing layers of wood boards and sheets together in cross patterns to make it stronger and more versatile.

Because mass-timber components are made in a factory, they arrive at building sites ready to be assembled, speeding up construction times.

Penticton’s Structurlam is a specialist in such mass timber.

Its products are in many of 450 five- and six-storey mid-rises that have been built over the past few years since the building code changed.

Structurlam also supplied mass timber for the 18-storey Brock Commons student residence building at UBC Vancouver that was constructed a couple of years ago as an example of how high wood buildings can go.

The first project to officially break ground under the early-adopters code is the 12-storey Tall Wood 1 mixed-use building in Langford, a suburb of Victoria, that will have shops on the ground floor and 11 floors of rental apartments.