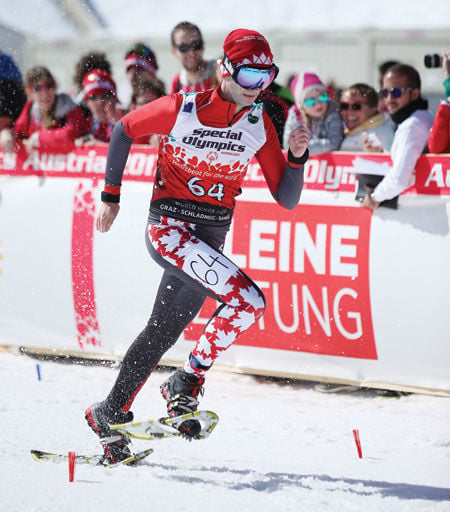 Tony Wilkinson competes in the 100-metre snowshoeing race at the 2017 Special Olympics World Winter Games in Austria. He won a silver medal in the event. 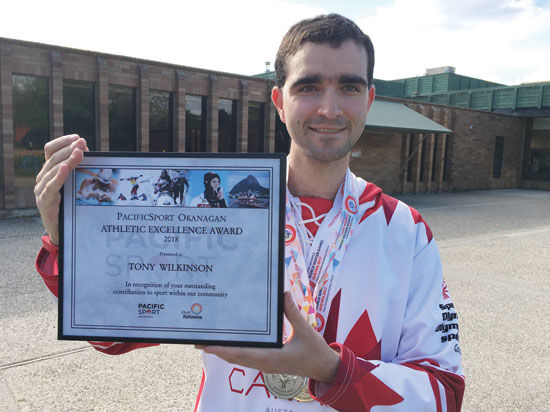 Tony Wilkinson, dressed in his Team Canada jersey and wearing the medals he won in the 2017 Special Olympics World Winter Games, displays an athletic award he received from PacificSport Okanagan.

Tony Wilkinson competes in the 100-metre snowshoeing race at the 2017 Special Olympics World Winter Games in Austria. He won a silver medal in the event.

Tony Wilkinson, dressed in his Team Canada jersey and wearing the medals he won in the 2017 Special Olympics World Winter Games, displays an athletic award he received from PacificSport Okanagan.

Tony Wilkinson has got a lot of life experiences and life skills thanks to Special Olympics.

In turn, Special Olympics Canada is surely thankful for athletes of Wilkinson’s calibre.

The 24-year-old, originally from Edmonton but residing in Kelowna since 2010, won multiple medals in snowshoeing at the 2017 Special Olympics World Winter Games in Austria and hopes to represent Canada again at the 2019 Summer Games in Abu Dhabi in his second sport of choice, bocce.

“Snowshoeing is similar to track and field, only you have extra weights on your shoes and you’re running in the snow,” said Wilkinson, proudly sporting his Team Canada uniform with his gold (4x100 relay) and silver (100-metre race) medals around his neck.

“I like it because I find it’s a little bit challenging and you have to work very hard.”

Wilkinson took up snowshoeing in 2011 and quickly rose through the regional, provincial and national levels to qualify for the worlds in Ramsau, Austria.

“One of the best times that I made for the 100-metre race was less than 16 seconds,” said Wilkinson, who also brought home a fifth-place ribbon in the 200-metre event. “It was my first time being at the World Games and I had a great experience. . . .”

“It was pretty cool that I was part of Team Canada and we made history as the first Special Olympics athletes to be honoured in the House of Commons and I got to meet the prime minister, Justin Trudeau,” he said of a ceremony on Parliament Hill in Ottawa last November following the worlds in March 2017.

Wilkinson was also a finalist for Kelowna’s male athlete of the year in 2017, finishing as a runner-up at the civic awards.

As for bocce, it was a natural progression from five-pin bowling, the first sport he tried back in 2002 on getting his start with Special Olympics in Edmonton.

“It’s sort of similar to bowling, but it’s like two different sports — half from curling and half from bowling,” said Wilkinson, who qualified for last summer’s provincials in three sports, including five-pin bowling and golf. He had to specialize coming out of regionals and chose to pursue bocce while captaining his four-player team, the Kelowna Grizzlies, to provincial gold in Kamloops.

They will now compete as individuals at the 2018 nationals, to be held in Antigonish, N.S., on the grounds of St. Francis Xavier University, from July 31 to Aug. 4.

“This time it is all singles, so my team will be playing on their own and whoever qualifies will go on to worlds,” said Wilkinson, who turns 25 on May 31. “Hopefully at the national games, if I do very well at bocce, I’ll get picked again for Team Canada and get to go to Abu Dhabi.”

His parents, David and Paola Wilkinson, have been by his side every step of the way. Both are volunteer coaches locally, and David has headed up Team B.C. on several occasions, already committing to the national team for the 2019 worlds.

Tony’s older brother and only sibling, 26-year-old Ty, is also getting involved to make it a family affair. Ty recently passed his coaching program for Special Olympics.

“My dad came along (to Austria) as my coach, and he’s been there throughout my journey to the World Games,” said Wilkinson. “He’s an awesome guy and he does marvellous great work teaching other athletes, plus me as well.”

Of course, there is more to Special Olympics than just the competitions. There are the stories of camaraderie and friendship, and all those life skills ranging from decision-making to leadership, confidence to commitment in terms of training and setting goals, then following through.

“I have been in Special since 2002 and I enjoy it very much,” said Wilkinson, who over the years has also dabbled in other sports, such as floor hockey, basketball and power lifting. “It’s really changing my life very well, learning about healthy eating and how long you should work out, that sort of stuff.”

“He keeps saying how it changed his life and it really did,” echoed Paola. “You can see the transformation . . . he was almost 200 pounds when he finished provincials and he’s less than 180 pounds now, so he’s lost weight but it’s turned into muscle and strength. And he’s a lot more confident now, even in his everyday life.”