This is the look of a proposed five-storey hotel and commercial development planned for Pandosy Street, kitty-corner to Kelowna General Hospital. Council will decide June 23 whether to grant the special permissions needed for the project to go ahead. 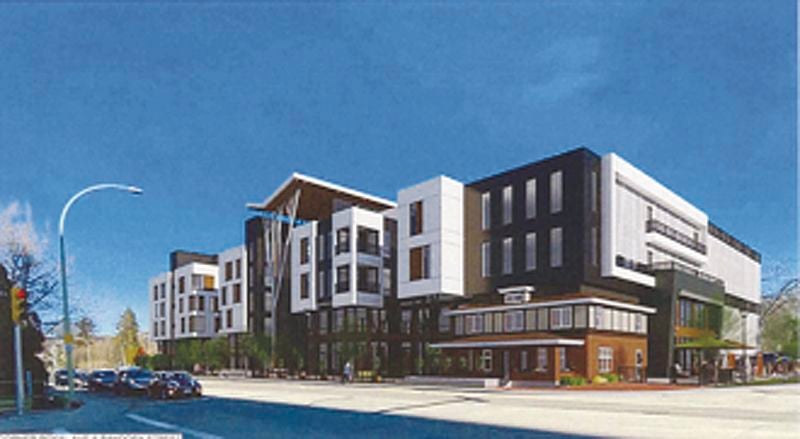 This is the look of a proposed five-storey hotel and commercial development planned for Pandosy Street, kitty-corner to Kelowna General Hospital. Council will decide June 23 whether to grant the special permissions needed for the project to go ahead.

A group of residents opposed to a large development kitty-corner from Kelowna General Hospital say the timing of a council meeting held late last night to discuss it feels “opportunistic.”

Erica Bell-Lowther, president of the Kelowna South-Central Association of Neighbourhoods (KSAN), said it’s not just the late hour of the agenda item, but the overall timing itself amidst the COVID-19 pandemic that’s cause for concern among residents.

“Taking it to public hearing now… it’s COVID, so it’s a great time for developers to take controversial proposals forward because they know they’re going to get away with a diminished public hearing,” she said in an interview before the meeting.

The five-storey mixed-use development is proposed for 2169 Pandosy St., and it includes a 74-room hotel, 35,000 square feet of commercial space, and preservation of a 107-year-old heritage home – which has been incorporated into the larger development.

The developer has asked for variance requests, and council was to discuss that request late Tuesday. The public was to have a chance to respond.

Bell-Lowther said many of those directly affected by the proposal have lived in the area for decades; they are in the older demographic and may not be able to attend the meeting.

“We’re kind of worried, but we’ve been encouraging people through flyers and emails to write letters at least, and if they are able, to go to the public hearing.”

The clerk’s office told Bell-Lowther that the late hour is because the item is expected to draw the most people. Administration wanted to clear other presenters from the council chamber before the matter is heard to make room for more in the gallery.

A provincial health order is in place limiting all public gatherings to 50 people.

“We’re really concerned about the lack of public consultation anyway by the city planning department, and by the developer there’s been absolutely none,” said Bell-Lowther.

She said area residents have a number of concerns with the development, including a significant increase in traffic as well as safety concerns over the narrow alleyways around the large development.

“Everybody that we’ve talked to are going to sell if this goes ahead,” she said, adding it could ruin the lives of families who have been there for 30 years.

“Whether they (council) are willing to stand up for the neighbourhood … we’ll see.”

She said Mayor Colin Basran has so far been receptive to feedback from neighbourhood residents.

Meanwhile, city staff did recommend the project be approved.

“Planning considers the location of the subject property to be high profile as a key redevelopment opportunity along a major urban corridor containing a heritage asset (Collett House),” staff say in their report. “Staff have worked diligently with the applicant and their consultant team over the past several months on the original submission and on a number of significant revisions and modifications.”

A website marketing the development said inspiration for the project began when Alana Marrington began caring for her uncle, mother, and friends as they moved through the medical system.

“As Alana slept on park benches between appointments, dealt with ill-equipped hotels, and struggled to find her mother the care and support that she needed, it occurred to her that there had to be a better way,” according to the site.

Marrington did not return a call for comment from The Daily Courier.