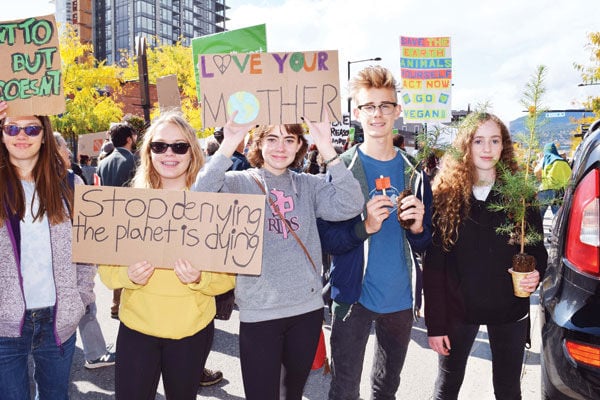 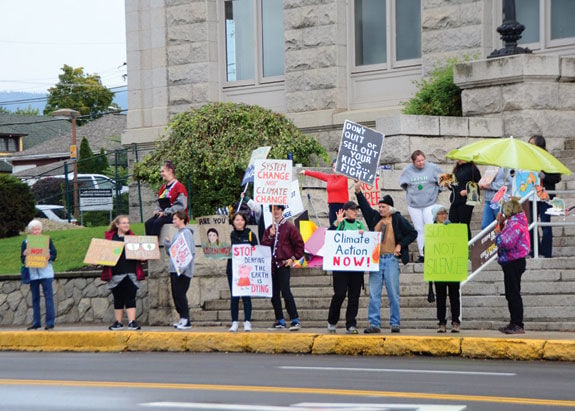 Activists demonstrated on the steps of the Vernon Courthouse on Friday as part of a world climate strike.

Activists demonstrated on the steps of the Vernon Courthouse on Friday as part of a world climate strike.

He was holding a map of the world with huge black “SOS” lettering over it.

However, someone else’s placard in the crowd of 1,000 was also garnering attention and chuckles.

A young woman was waving a sign reading “Sex! Now That I Have Your Attention, Stop Screwing the Environment.”

What a difference a week makes.

On Sept. 20, a global climate strike attracted 200 protesters to gather at City Hall and march up Bernard Avenue, calling on government and the public to do more to curb climate change.

On Friday, the crowd was five times as big as 1,000 turned out to rally and march.

While the horde was made up of all demographics, there were a lot more students at the latest strike.

It’s called a strike because the movement started last year when 16-year-old Swedish student Greta Thunberg urged students to “strike” or skip school on a Friday afternoon to call for action on climate change.

Molly Shey, 14, a Grade 9 student at Dr. Knox Middle School, was missing math, gym and drama to be at the climate strike.

“It’s OK to skip school for this because we have an emergency on our hands,” she said.

“But, if we all act now, we can change things.”

Shey was joined by her Grade 9 friends Lily Williams, Payton Jones and Owen Hagen, who all held sapling trees and signs saying “Stop Denying the Planet Is Dying and Love Your Mother.”

“This is vitally important,” said Williams.

“We want to live to adulthood. Only if everyone changes is that possible.”

Last week, Kevin Kaardal, superintendent of Central Okanagan Public Schools, circulated a letter to all parents stressing the climate strike was not sanctioned by the school district and kids should not skip school to protest.

Meantime, public schools recognize climate change is one of the most critical issues to face humanity and citizens of the age of majority have the right to freely assemble.

If parents wanted to allow their kids to take part in the climate strike, they were to contact their child’s school and excuse the absence.

After gathering on the lawn in front of City Hall, the crowd crossed Water Street onto Queensway Avenue and marched up Bernard Avenue, taking up the entire eastbound lane.

Traffic was also stopped at all cross streets as the mob didn’t stop for red lights.

There was lots of honking.

But it was hard to tell if motorists were sounding their horns in support or frustration with being stuck in traffic.

There was also a big vegan contingent at the strike.

Other signs reflected the demographic of those waving them.

Signs of high school students read “You’ll Die of Old Age. We’ll Die of Climate Change,” and “If You Did Your Job We’d Be in School.”

The favourite chant of the crowd seemed to be “1.5 to stay alive.”

It refers to keeping the planet’s average temperature warming to no more than 1.5 C in order to avoid catastrophe.

What letter grade would you give city and highway crews on snow removal in the Central Okanagan during the dump of snow we had earlier this month?