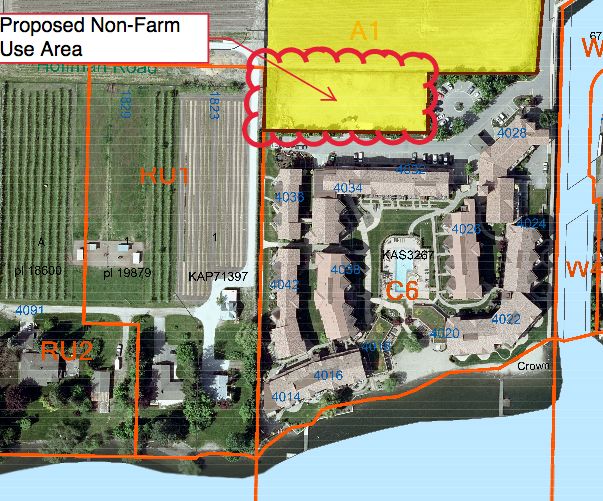 A 35-stall parking lot should be permitted in the yellow-shaded area to ease congestion around the Barona Beach Resort in West Kelowna, city councillors say, despite the land being zoned for farming. 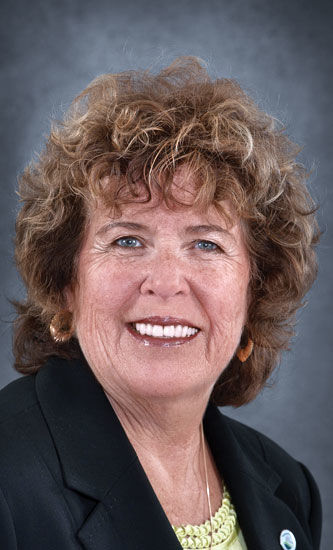 A 35-stall parking lot should be permitted in the yellow-shaded area to ease congestion around the Barona Beach Resort in West Kelowna, city councillors say, despite the land being zoned for farming.

West Kelowna city councillors surprised themselves Tuesday by supporting the proposed conversion of farmland to a parking lot.

They voted unanimously to endorse plans by the owners of units at Barona Beach Resort to convert part of an adjacent farm property to a 35-stall lot.

While councillors said preserving agricultural land was important, they said so too was resolving a long-standing and ongoing parking problem in the area around the resort.

“There is a saturation of cars there in the summer,” Coun. Doug Findlater said. “Parking issues are a real problem down there around Pritchard Drive.”

“The area is not safe for a large portion of the year,” agreed Coun. Carol Zanon.

City staff, the Ministry of Agriculture and Interior Health all opposed the planned conversion of 0.2 of a hectare of a larger farming property, owned by the Naka family, to a 35-stall overflow lot for Barona Beach residents. The Nakas actively farm the rest of the land.

Zanon said it was “righteous” of the parking lot critics to take a stand in favour of protecting agricultural land when the reality is the area proposed for the lot has not been actively farmed in decades.

The parking lot, which would not be paved, could easily be converted back to agriculture if the need arises in the future, Zanon said, and in the meantime serious congestion and traffic safety issues would be eased.

It’s relatively rare for city councils to endorse plans to convert farmland to parking lots, as the councillors themselves acknowledged.

“I gotta say I’m surprised,” Coun. Jason Friesen said. “I thought this was going to be shot down real quick.”

“I don’t see any negative impacts on the community,” Mayor Gord Milsom said.

Council’s support for creation of the parking lot is only advisory in nature. The final decision rests with the provincial Agricultural Land Commission.