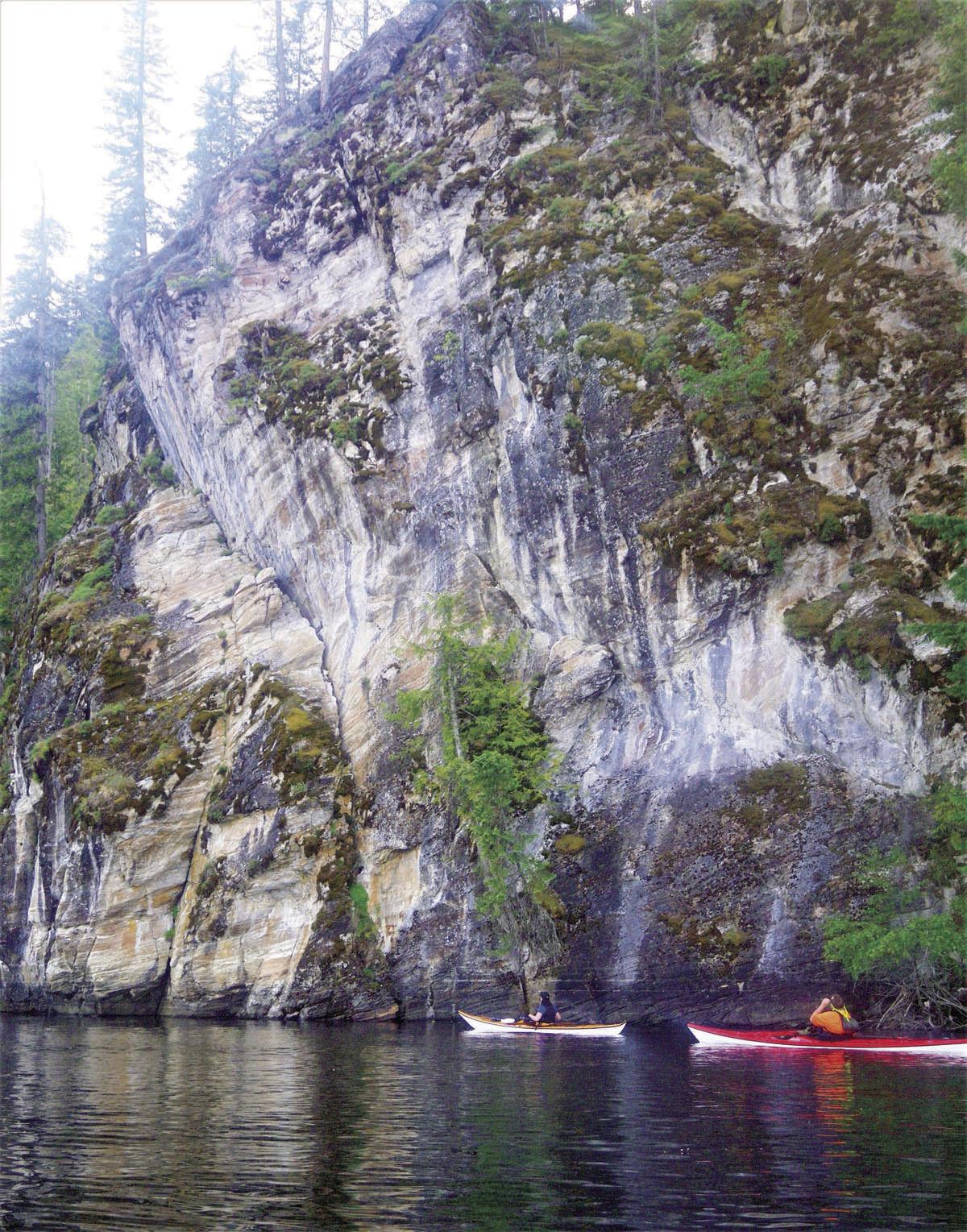 The south end of Mabel Lake in the North Okanagan has numerous sandy beaches on the east side and a large colouful rock face on the west side, above. Members of the Kelowna Canoe and Kayak Club were dwarfed by its height and several stopped to take photos. 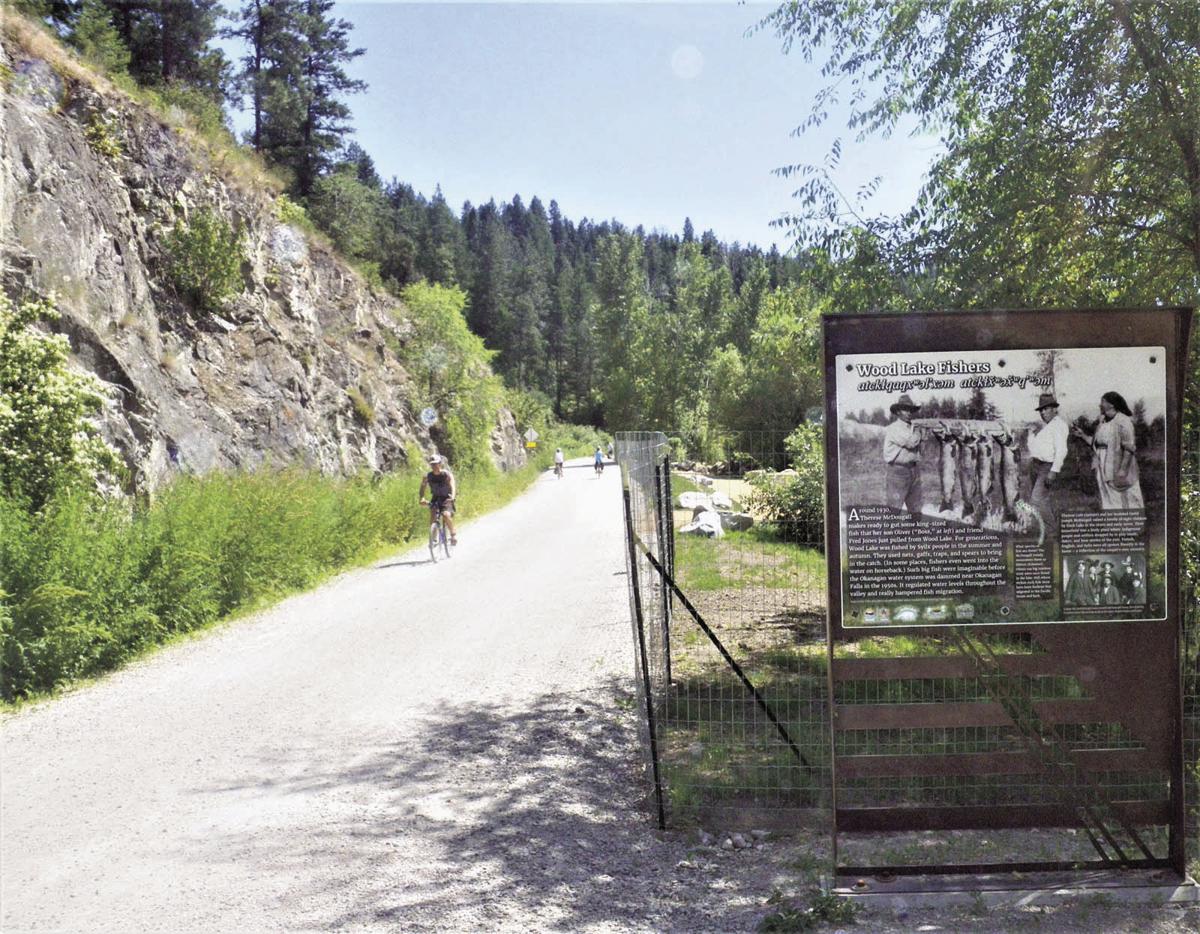 finished with plants in the fall. A new panel shows the results of fishing in Wood Lake in the 1930s before fish migration was limited by man-made dams.

The south end of Mabel Lake in the North Okanagan has numerous sandy beaches on the east side and a large colouful rock face on the west side, above. Members of the Kelowna Canoe and Kayak Club were dwarfed by its height and several stopped to take photos.

finished with plants in the fall. A new panel shows the results of fishing in Wood Lake in the 1930s before fish migration was limited by man-made dams.

The Okanagan Rail Trail was dusty on Monday as our Okanagan E-bikers Plus group cycled the 53 kilometres from Woodsdale Road in Lake Country to Coldstream and back. The Trek Powerfly 5 e-bike and its panniers were so dirty that they got a water spray wash at home, but quickly dried in the hot sun.

It was so hot that we brought extra water with us and one cyclist even had a wet towel to wrap around her neck. A steady breeze on the way back kept perspiration to a minimum but the summerlike conditions were a warning that more is coming in July and August.

Fencing has been erected at the Coldsream and Ribbleworth Falls interpretive sites, along with temporary signage, to encourage trail users to stay out this summer. Before this week’s rain, the flow of water down Ribbleworth Falls had diminished to the point where someone joked they falls could be renamed Dribbleworth.

“The earth-moving components of the interpretive site development in Lake Country and the North Okanagan are now done until further landscaping can be completed in the fall with cooler temperatures to allow the plantings to get established,” said Karen Miller, communications officer for Lake Country.

Lake Country is planning a ribbon-cutting ceremony at 2:30 p.m. on Sunday for the multi-use pathway at the largest pull-out (with the fenced dog park) along Pelmewash Parkway, she added.

“Besides celebrating the accomplishment of phase one of Pelmewash Parkway development, this event will give us an opportunity to engage with the community on a new Pedestrian, Bikes and Recreational Trails Plan that is being undertaken, and to encourage locals to try the new paved multi-use pathway.”

Miller recently had a chance to cycle the loop around Wood Lake using the Okanagan Rail Trail and Pelmewash Parkway. “And for a 20-kilometre ride in the rain and wind, I was happy it only took us 90 minutes including time to stop and take pics along the way,” she said with a laugh.

When the temperature for hiking and biking rises to stifling, it’s time to hit the cool waters of Okanagan lakes.

Last Saturday, members of the Kelowna Canoe and Kayak Club drove to Mabel Lake in the North Okanagan for a leisurely paddle around the south end. Unlike many Southern Interior lakes, which have forest extending all the way down to a rocky shoreline, the south end of Mabel Lake has numerous sandy beaches and we found a large and colourful rockface on the western shoreline.

The rock face was reminiscent of the large cliff on the east side of Kalamalka Lake. If you get far enough away, there’s a great echo across the water.

KCKC has Wednesday night paddles from numerous Central Okanagan lakefront parks on Okanagan Lake but has also initiated a series of daytrips to smaller lakes. Peachland to Rattlesnake Island is planned for June 29 and Kekuli Bay Provincial Park to Cosens Bay is on July 7.

During a recent cycle outing up the Trans Canada Trail from Penticton to Little Tunnel, the Sheriff ran into Ellen Woodd of the Trail of the Okanagans.

She reminded him the AGM of the Trail of the Okanagan is at 1 p.m. today at the Penticton Museum/ Library Auditorium, 785 Main St. Keynote speaker Ron Mattiussi, former manager for the City of Kelowna, was instrumental in bringing together the stakeholders and making the Okanagan Rail Trail a reality. His topic: Seven Jurisdictions — One Trail: How the North and Central Okanagan worked together to bring a vision to reality.

After his address, he will join a panel with three others moderated by Don Gemmell, president of the Trail of the Okanagans.

A number of Kelowna people have expressed concern about Robert Lake’s changes over the past couple of years. In particular, there is concern about the increased water level in the lake in Kelowna’s Glenmore Valley making it difficult for shorebirds to use the lake for feeding and nesting.

Water pumped from the lake is draining into Mill Creek with unknown effect.

If you are one of those concerned, you are invited to attend the inaugural meeting of the Friends of Robert Lake at 7 p.m. on Monday in the Community Room at the Kelowna MEC store in Orchard Plaza.

A warning to other hikers of Mount Boucherie: a local outdoor enthusiast just figured out where his (mild) poison ivy-type rashes came from. It was poison ivy.

“It turns out that it loves my favorite exercise trail, the Andesite Grinder trail on Mt. Boucherie,” he wrote in an email. The Andesite Grinder goes straight uphill from the East Boundary Road trailhead for those who like a challenge instead of taking the multi-switchback Rush Trail to the top.

The distinctive three-leafed plant runs for about 15 metres going east (to the right) from the map pin, he said. “It’s so thick that you can’t walk the trail without touching it. There is another trail that bypasses that patch and I’ll try that next time. Poison ivy loves shaded areas, and I think the bypass trail is not shaded. So there’s hope.”

Last weekend’s Making Tracks column and Travel page story about the Trail of the Coeur d’Alenes and Trail of the Hiawatha in Idaho resulted in several emails.

One reader said: “I have done the Hiawatha Trail three times now and love it. We have more trestles (in Myra Canyon) and they have more tunnels. We also completed the full circle twice, which includes gravel and hills, making it three overnighters for a total of 306 kilometres.

“Just a comment on the Hiawatha fee charged. I couldn’t agree more with the fee as their trails are so much better maintained than ours. The fee does not seem to deter people and your column refers to the comment by a cyclist who called our KVR (between June Springs Road and Chute Lake) “a national disgrace.”

“At one time, the KVR was rated in a cycle magazine as the 10th best cycling destination in the world. But having done it many times in various sections and meeting unhappy foreigners who have come to enjoy the KVR, their comments are not very complimentary. I would be all for charging a fee if it went to better maintaining the trail. The part with the trestles is OK — as non-motorized vehicles are not allowed. But where there are motorized vehicles, the trail is very poor for cyclists. It has such beautiful views and would be amazing if better maintained. It could be made into something more spectacular.”

Another reader wrote: “We spent several days last fall biking on the Trail of the Coeur d’Alenes (with our e-bikes) and it was very enjoyable. I did note, however, that trail rules prohibit motorized vehicles (such as e-bikes).”

The Sheriff and friends requested, in advance, a trail pass for e-bikes called an Other Power Driven Mobility Device (OPDMD) permit from the trail office. A woman there said she didn’t think we needed one but would mail the free passes to us.

The plastic-coated passes are for specific dates, are non-transferable and must be clearly displayed. That information was passed to this reader.

“I will keep this in mind for the next time we go down there,” he responded, adding: “Over the past two winters, we have spent some time in Tuscon where there are 500 miles of the most excellent paved shared multi-use paths where e-bikes are welcome.”

You can celebrate cultural heritage in style and dance the night away by the water at the Gibson House 30s Swing event in Lake Country.

Everyone is invited to wear their finest 1930s-style attire from 7-10 p.m. on June 30 for the party at the Gibson Heritage House in Kopje Regional Park along Carrs Landing Road.

You can dance all evening long on the lawn next to Okanagan Lake and enjoy the sounds of a live band playing on the patio. You’ll be able to tour the heritage house and sip non-alcoholic cocktails. Tickets for this event will be available from staff at the EECO in Mission Creek Regional Park at a cost of $10 per person.

For more information about this or other regional park programs, go to the Regional District of Central Okanagan website: regionaldistrict.com/parksevents or contact the EECO at 250-469-6140.