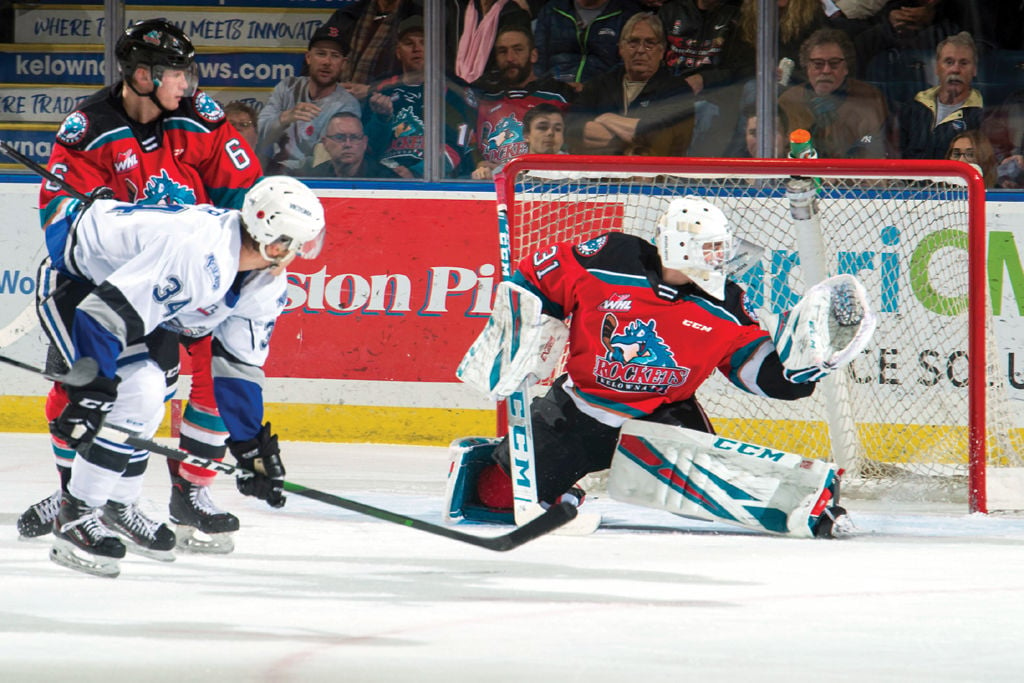 KELOWNA, BC - NOVEMBER 6: Cole Schwebius #31 of the Kelowna Rockets makes a save against the Victoria Royals after swapping goalies in first period at Prospera Place on November 6, 2019 in Kelowna, Canada. (Photo by Marissa Baecker/Shoot the Breeze) 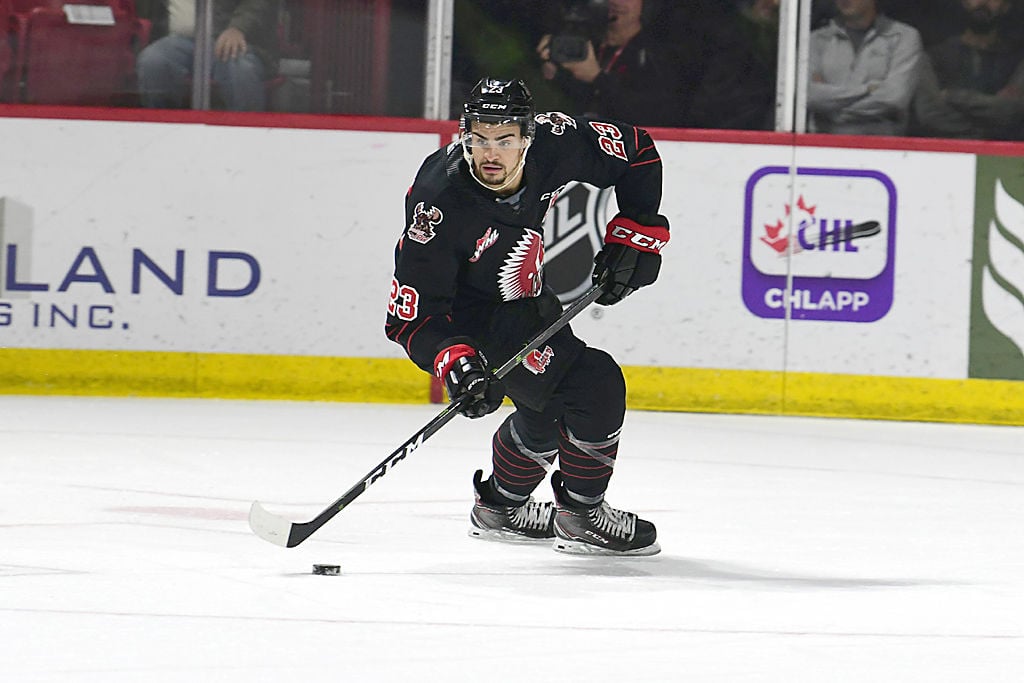 The Kelowna Rockets acquired Jadon Joseph from the Moose Jaw Warriors on Sunday, Nov. 24, 2019. Going the other way were Kyle Crosbie, James Porter and Kobe Mohr.

KELOWNA, BC - NOVEMBER 6: Cole Schwebius #31 of the Kelowna Rockets makes a save against the Victoria Royals after swapping goalies in first period at Prospera Place on November 6, 2019 in Kelowna, Canada. (Photo by Marissa Baecker/Shoot the Breeze)

The Kelowna Rockets acquired Jadon Joseph from the Moose Jaw Warriors on Sunday, Nov. 24, 2019. Going the other way were Kyle Crosbie, James Porter and Kobe Mohr.

Cole Schwebius has seen all sides of the Kelowna Rockets — from the stands to the visitors’ bench and now the home team’s crease.

The 18-year-old goaltender grew up watching games as a fan. He’s a local kid who attended Dr. Knox and OKM schools.

The Seattle Thunderbirds chose him late in the 2016 bantam draft out of Okanagan Hockey Academy, and he headed south.

He had just finished a productive rookie campaign with the T’Birds this spring when he got a call telling him he was going home as part of a four-player trade.

“I was pretty shocked,” Schwebius said during a recent practice. “I knew there was a good chance I was going to be traded, but Kelowna was definitely the last place on my mind to go.”

Schwebius admitted he knew a trade was possible, but hadn’t considered Kelowna.

“They had their two guys here,” he said. “It seemed like they had some depth.”

That depth would be Roman Basran and backup James Porter. Both were serviceable last season on a team that missed the playoffs.

But with Kelowna hosting the Memorial Cup this season, it would seem Schwebius not only offers better insurance in the backup role, but also pushes Basran.

“After it started to settle in, it was pretty exciting,” Schwebius said.

He’s demonstrated he has the ability to play a significant role. Schwebius is 3-3 this season with a .915 SV% and 2.83 GAA, not much of a drop from Basran’s numbers this season.

He even helped Kelowna beat his old team on Friday night, a 3-2 win where he stopped 37 of 39 shots. Schwebius also has the team’s only shutout, a 1-0 win over the Victoria Royals on Oct. 30. Although it was “weird” at first playing at home, he’s embracing it now.

“It took a couple of games to settle in,” he said. “It’s not as distracting now. It feels more at home.”

“It was definitely a learning experience,” he said. “It as the first time I’d ever been in the position where I wasn’t playing all the games. That was difficult at times, but it helped me grow a lot, I think.”

Gordon encouraged him to take the most professional approach possible to goaltending.

“He said, ‘Look, to get better, sometimes you’ve got to step back a little bit and let yourself get better,’” he said. “If you get in your own head, you’re not going to improve in any aspect of your game.”

In Kelowna, Schwebius is getting the chance to continue that work with greater consistency. Adam Brown, the Rockets goaltending coach, lives in Kelowna whereas Gordon would make monthly trips to Seattle from Alberta.

Schwebius has also had the chance to work with Lyle Mast in Kelowna, a coach who has worked with Minnesota Wild goalie Devan Dubnyk and Washington Capitals backstop Braden Holtby, among others.

It’s also nice to be playing behind a team with more success. Seattle finished last in the U.S. Division last season and lost in the first round of the playoffs.

Simplifying his game is goal No. 1 now.

“Growing up, I relied upon my athleticism,” Schwebius said. “At this level, you can’t, it’s too fast. You just need to work on simplifying your game, letting the play happen instead of trying to force things.

“I like the direction that my game is going.”

The WHL named Rockets goaltender Roman Basran goaltender of the week on Monday.

Wednesday at home, Basran stopped 26 of 27 shots in a 4-1 win against the Victoria Royals.

Basran returned to the crease and stopped 24 of 25 shots to claim a 2-1 win against the Tri-City Americans on the road Saturday.

The Rockets continued to tinker with their lineup on Sunday, acquiring 20-year-old centre Jadon Joseph from the Moose Jaw Warriors in exchange for forwards Kyle Crosbie and Kobe Mohr, goaltender James Porter and the Rockets’ third-round pick in the 2022 bantam draft.

“We needed to get a right-shot centreman that can consistently win faceoffs,” said Rockets GM Bruce Hamilton. “Kobe was a big part of this deal, they really wanted him in the trade. James wanted to get back into the league, and Crosbie wanted a chance to play more minutes.”

Lethbridge selected the six-one, 172-pound forward in the fifth round at the 2014 draft. Joseph has also played with Vancouver and Regina. Crosbie, 18, appeared in 77 games for the Rockets, collecting 14 points (8G, 6A) and 12 penalty minutes.

The Rockets added Mohr as a free agent earlier this month after Kyle Topping went down (ankle), and he scored a goal and three assists in nine games.

Porter, 19, became expendable when the Rockets traded for Schwebius from Seattle in the spring. The Rockets had just demoted Porter to the Vernon Vipers last week.

Joseph is expected to make his debut with the Rockets this Tuesday when they host the Edmonton Oil Kings.

The Rockets beat the Oil Kings 3-1 last November in Alberta. Edmonton opened the scoring, but Liam Kindree and Nolan Foote (with two) replied. Leif Mattson assisted on all three goals while Roman Basran stopped 26 of 27 shots.

This will be their only meeting this season.

F Leif Mattson scored twice in a 2-1 win over the Tri-City Americans, Saturday. The 20-year-old now has 18 points in 23 games.

D Matthew Robertson was the New York Rangers second-round pick in 2019. The Oil Kings assistant captain has 13 points in 21 games this season.