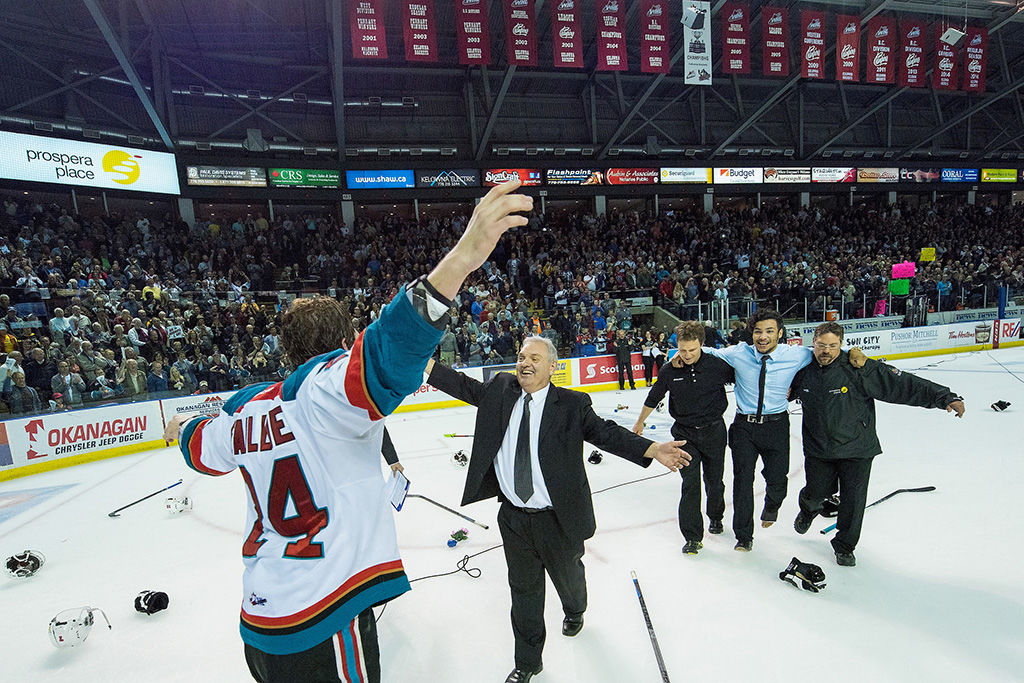 Tyson Baillie of Kelowna Rockets celebrates the team's WHL championship with Lorne Frey against the Brandon Wheat Kings on May 13, 2015, in Kelowna. 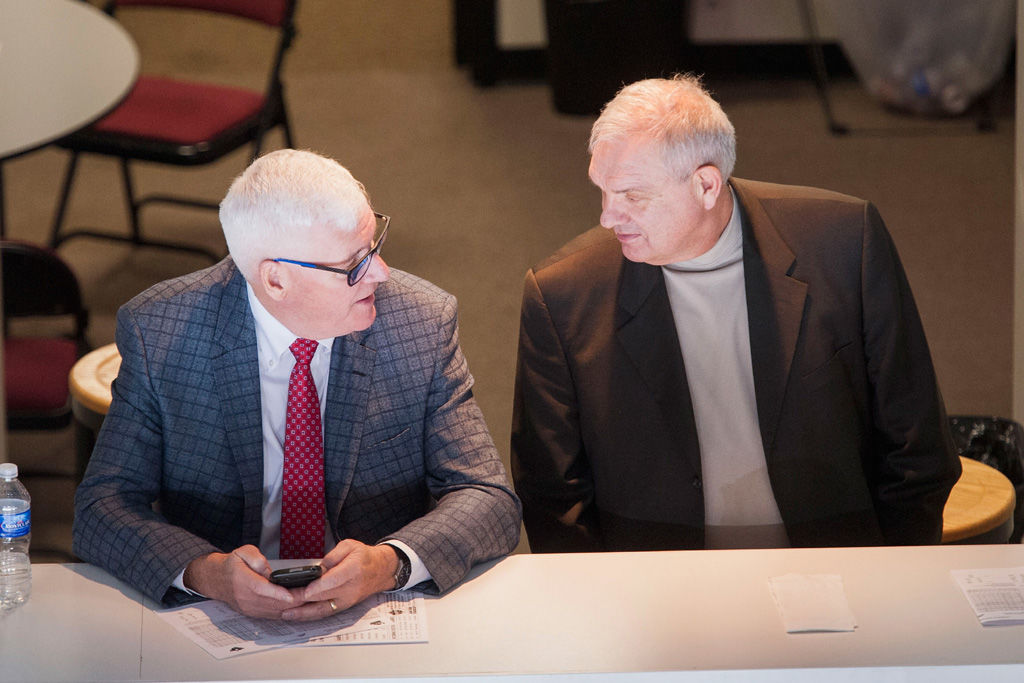 Bruce Hamilton, owner and general manager, sits with Lorne Frey, director of player personnel of the Kelowna Rockets in the media booth on Feb. 1, 2017 at Prospera Place in Kelowna.

Tyson Baillie of Kelowna Rockets celebrates the team's WHL championship with Lorne Frey against the Brandon Wheat Kings on May 13, 2015, in Kelowna.

Bruce Hamilton, owner and general manager, sits with Lorne Frey, director of player personnel of the Kelowna Rockets in the media booth on Feb. 1, 2017 at Prospera Place in Kelowna.

Lorne Frey is positive he’s headed in the right direction.

One of two men credited with ensuring the Kelowna Rockets are a perennial championship threat on the ice has announced he’s stepping back from his post and returning home to Swift Current, Sask.

When reminded that most people retire from Saskatchewan and move to Kelowna, Frey just laughed.

“It’s something, certainly the last couple of months, my wife and I have discussed. We’re pretty happy with the decision we’ve made,” Frey said. “I just turned 70 the other day. I’ve been in this business for around 45 years, and it’s time to probably slow it down, somewhat.”

Frey was one of the first employees Bruce Hamilton hired when the Hamilton family was awarded a Western Hockey League expansion franchise more than 30 years ago. Frey is leaving as Kelowna’s top scout, assistant general manager and director of player personnel. He’s taking on an adviser role with the Rockets, and will continue scouting in Saskatchewan and helping with training camps.

But he’s stepping away from the travel and the day-to-day grind in favour of their extended families, especially two grandchildren.

“We just want to spend some time with them, as much time as we have remaining,” Frey said.

There’s an excellent chance you’ll find Frey at the rink in Speedy Creek regardless. You can’t leave behind a life in hockey that easily.

Frey grew up in the southern Saskatchewan community among 11 brothers and sisters where hockey was king.

Frey said he likes to think he could skate well and had good hands for his size (and how can you argue with his scouting reports?). He was five-foot-seven and about 190 pounds in those days, and he loved to kill penalties and play a checking role.

He eventually made his way onto the Saskatoon Blades, playing one season before he was traded to the Brandon Wheat Kings.

Rather than upend his life, however, he declined the trade and stayed in school. Frey went on to play with the University of Saskatchewan Huskies and graduated with Bachelor’s degrees in science (physical education) and education.

He applied to nearly a dozen schools, but couldn’t get a full-time teaching job, so instead stayed with hockey.

Frey earned his stripes as an assistant coach at U of S, and then with the Blades as well as minor and junior-A teams in Saskatchewan.

He eventually landed with his hometown Broncos as assistant GM and assistant coach.

Frey was part of Swift Current’s 1989 Memorial Cup championship team, but had a falling out with ownership there after the Graham James scandal.

He quit the Broncos at just the right time. Hamilton was planning to bring the Tacoma Rockets into the WHL.

“I hired him before we even had the team,” Hamilton said. “Like I’ve said to many people, there are very few decisions ever made hockey-wise that I don’t (consult with Frey). Everything goes through him, too.

Rockets head coach Kris Mallette knows full well how Frey has made an impact on the franchise.

Mallette went undrafted in the WHL, but Kelowna signed him shortly after that and invited him into training camp.

He played two full seasons with the Rockets before returning to Kelowna after his pro career ended to take up coaching.

“I don’t think I’d be here today if it wasn’t for Lorne Frey,” Mallette said.

Frey gets credit for helping Kelowna find players like Josh Gorges (San Jose, Montreal, Buffalo) and Shea Weber (Nashville, Montreal). But there have also been dozens of great hockey players that have come through the city thanks to Hamilton, Frey and the scouts, Mallette said.

He said Frey’s memory and his work ethic set him apart.

“The teams over these years are a definite byproduct of what he has been able to identify — a keen eye for finding talent,” Mallette said. “His memory is just phenomenal...and he’s just able to see the potential in these players. I don’t know what the secret is to it, he’s just very good at finding that potential.

“He’s got a vision for them ... he finds players that tend to be sometimes late-bloomers, tend to be a little under the radar that he just finds these intangibles with and, sure enough, have scored some big goals and played some very big parts in the Rockets organization.”

Frey said he’s most proud of the success and consistency of the Rockets as well as the relationships he’s made.

“I’ve enjoyed the scouting aspect of it, I always have,” he said. “I enjoy going to the rink. I enjoy watching these young players ... and then watching them, when we have our drafts, come in and develop and grow into young men. And then, maybe, some of them have gone to do pretty good things in the National Hockey League and have good pro careers.”

There are no immediate plans to hire a new assistant GM; Hamilton said he will likely promote from within the organization.

And, of course, Frey will only be a phone call away.

“We were just thinking the other day, we’ve been 30 years here already,” Frey said. “It’s been a great city to work in and it’s been a lot of fun in this organization.

“It’s been a great experience for me. ... We’ll see where it goes, we’ll see where it ends up. But right now, we’re moving back to Swift Current to be with our grandkids and our kids. We’re looking forward to that.”