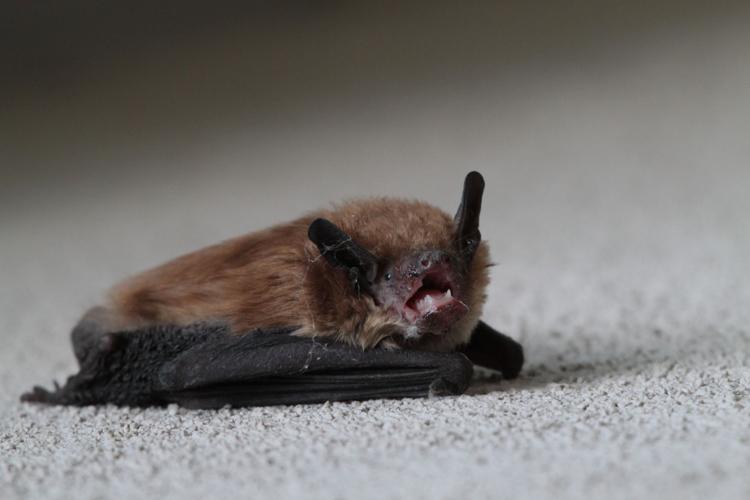 The Okanagan has 14 different species of bats, such as the big brown bat, above. Sara Bunge, senior park ranger in the South Okanagan region for BC Parks, conducts annual bat counts to see how they are doing and monitor whether white-nose syndrome has arrived in the Okanagan from Washington state. 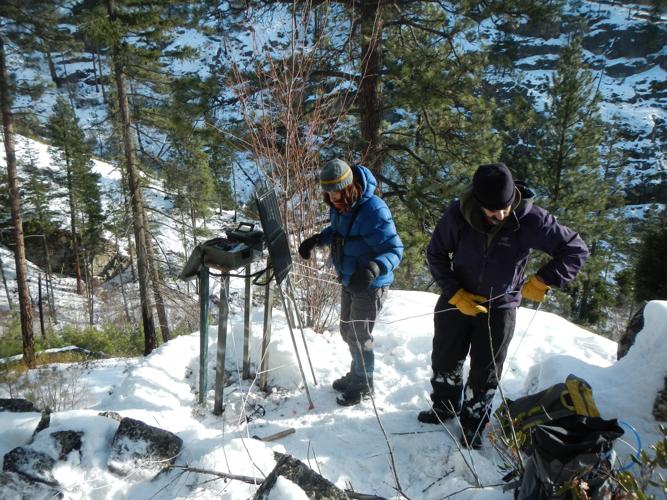 Researchers use mist nets to catch bats near known colonies but where they suspect bats, they set up a bat monitoring station and record their echo location sounds as they're flying around. Depending on the frequency of the call, you can determine which species they are. 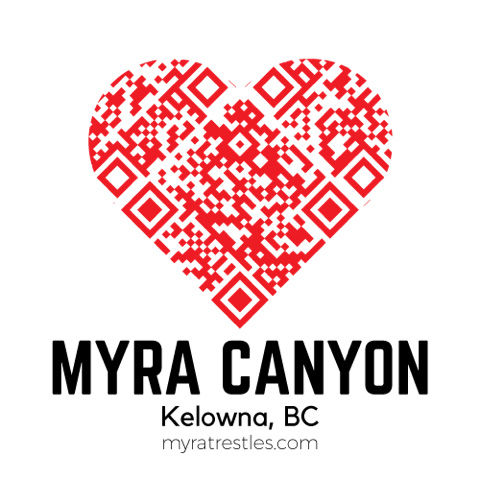 The Myra Canyon Trestle Restoration Society is selling peel-and-stick, UV-resistant stickers as a fundraiser to continue maintenance of the canyon's 18 trestles, two tunnels and trail system. The stickers sell for $5 each but are also available wholesale for those who want to sell them.

The Okanagan has 14 different species of bats, such as the big brown bat, above. Sara Bunge, senior park ranger in the South Okanagan region for BC Parks, conducts annual bat counts to see how they are doing and monitor whether white-nose syndrome has arrived in the Okanagan from Washington state.

Researchers use mist nets to catch bats near known colonies but where they suspect bats, they set up a bat monitoring station and record their echo location sounds as they're flying around. Depending on the frequency of the call, you can determine which species they are.

The Myra Canyon Trestle Restoration Society is selling peel-and-stick, UV-resistant stickers as a fundraiser to continue maintenance of the canyon's 18 trestles, two tunnels and trail system. The stickers sell for $5 each but are also available wholesale for those who want to sell them.

Sara Bunge laughed and responded: “I guess that would be me” as we began an interview Tuesday.

However, you shouldn’t try the Sheriff’s new nickname for her again since the senior park ranger in the South Okanagan region for BC Parks is serious about bats. But it’s not hands-on work.

“As much as possible, we don’t want to be handling them,” she said.

“We don’t want to encourage people to handle them either. Often if (bat researchers) are trying to find out where a species is, they’ll set up mist nets in the evening and bats get caught in the nets. Then they use latex gloves to handle the bats so you're not giving them something (which could harm them) and you’re not getting anything from them.

“Rabies is a bit of a concern, but it’s more passing on some disease or whatever. Mostly for me, it’s just doing the bat counts every summer,” she said.

BC Parks’ South Okanagan region extends from the U.S. border to Fintry Provincial Park. Three provincial parks have bat colonies, either in buildings or bat houses.

Fintry has three bat houses on posts, plus two other ancient boxes in a pine tree by one of the campsites, each jammed with 100-150 bats. The Manor House, the large building, has had as many as 1,300 bats in its attic for decades. And the packinghouse there has another 1,300.

During the 2015-16 winter when the Fintry bats were gone, renos made the Manor House attic more open so bats could fly around and plastic was placed on the floor to collect guano that will be removed every few years.

The plastic also sealed off the smell from a new caretaker suite and office for the Friends of Fintry. Similar plastic went into the former Peachland primary school during the past 10 years.

Bunge has monitored bat populations consistently since 2014 to determine how they are doing and check for white-nose syndrome, a fungal disease which has decimated colonies elsewhere.

In March 2016, it was detected east of Seattle and has now spread across Washington state.

“That's not too far away. We just want to have a really good sense of what our bat populations numbers are now because we think, inevitably, white-nose syndrome will likely show up here.

“Also we’re monitoring these bat houses in the spring to see if there's maybe dead bats falling out of the bat houses,” said Bunge.

She tries to conduct two counts in late June before bats have their pups and two counts in mid- to late July when pups are flying.

To assist with the counts, Bunge has a list of 50 volunteers. Those interested in volunteering for the 2019 counts can email her at sara.bunge@gov.bc.ca.

With bat boxes, she needs three to five volunteers at each, and at the Manor House at least three because bats exit from different parts of the building.

“At the packinghouse, it’s great to have five or six people because there are so many different exit points.”

White-nose syndrome can wipe out an entire colony but “we’re not sure if it affects every different kind of species,” she said.

The Okanagan has 14 different species: some like the Yuma and California are common while others like the pallid (light-coloured) are quite rare. Not all bat species, especially the rare bats, use bat houses or a building. Some in the Okanagan may overwinter in caves so they are hard to track.

“They’re little, so you can't really put transmitters on them to see where they go. We pick areas in different parks — like Skaha Bluffs that we don’t know much about -— where we think OK, maybe there’s bats in the winter.

“So we put out these bat detectors to record the echo location sounds that the bats make if they’re out flying around. Depending on the frequency of the call, you can determine pretty closely what species that is.”

There’s a lot researchers still don’t know about bats, she admitted. “I don't know if we know enough about them to say (the Okanagan population is stable and healthy) or not. Probably stable and healthy, for now, with some of the more common species. Some of the rarer ones, we don’t have a lot of information about what their numbers are doing because we barely know where their habitats are. The big concern is white-nose coming.”

And for her personally, why bats?

“There’s lots of cool animals that are involved in my work with BC Parks. Bats are just one of the cool species. I think they are underrated. They eat lots of bugs. They are just really neat because they are a flying mammal. I think they are a great part of the ecosystem. I also like snakes a lot, too,” Bunge admitted with a laugh.

Her partner isn’t squeamish about her fascination with bats or snakes, she added.

“I do sometimes bring my work home. He’s OK. He doesn’t even mind the dead ones in the freezer.”

Bunge focuses on provincial parks, but outside the parks, groups like Peachland’s Bat Education and Ecological Protection Society also conduct bat counts. The society conducts weekly counts at the old primary school on Beach Avenue where more than 1,000 bats flutter out of the attic at dusk. For an added thrill, spectators can stand in the adjacent

irrigated sports field where bats from one of the largest colonies in the province swoop down to feast on the many insects there.

“We don’t have any connection with the Peachland society — except for us having a tour of the attic of the old Peachland school house to see what they had done to make it better for the bats,” said Bunge.

“We do have a good connection with our local BC Community Bat Program co-ordinator, Paula Rodriguez de la Vega. We sometimes share volunteers, and we do share info and data with Paula. She deals with bat stuff outside of parks and we deal with bats within park boundaries."

For more information on the BC Community Bat Program, go to bcbats.ca or call 1855-9BCBATS, ext. 13.

You can celebrate the return of kokanee salmon this weekend while seeing them in their spawning colours during the Welcome the Kokanee Salmon Festival at Hardy Falls Regional Park south of Peachland.

Check out a number of displays in the grassy area of the regional park along Hardy Street just off Highway 97 and watch salmon spawning in Deep (Peachland) Creek. The free activities are from 11 a.m. to 3 p.m. on Sunday. A park interpreter will be answer questions about the land-locked salmon.

The upstream trail in the park remains closed due to damage from flooding in the spring of 2017.

The Myra Canyon Trestle Restoration Society has a new way to contribute toward maintenance of one of the Okanagan Valley’s most popular attactions.

“All profits go directly toward keeping Myra Canyon ‘spectacular’ for another 25 years. Our design is intended for all of us in the greater Okanagan to show our appreciation and love of Myra Canyon.

“The heart shape is a QR code that connects to the myratrestles.com fundraising campaign. We are hoping to see thousands of autos, bikes and other places with this peel-and-stick, UV-resistant sticker on them and also on the front of many shop windows.”

Since 1993, the non-profit registered charitable foundation has worked with BC Parks to maintain and care for the 12 kilometres of the Myra Canyon including its 18 trestles, two tunnels and trail system.

“Myra Canyon is a world-renowned destination right in our backyard; 70,000 annual visitors must be right. Our volunteers have donated tens of thousands of hours and energy. Our annual maintenance budget to keep Myra Canyon spectacular is $30,000 which we support from fundraising. You can learn more at myratrestles.com,” he said.

Tourism Kelowna, Myra Canyon Bike Rentals and Cooper Medical Supplies are already on board. The website will be regularly updated with a list of vendors. The retail price is $5 plus tax. A countertop display case is available. Email mctrs@myrstrestles.com.

Music in the Mountains is coming to Sun Peaks Resort near Kamloops on Aug. 25-26. Spanning two days, the weekend of free outdoor concerts will feature award-winning Canadian headliners Dan Mangan and Bedouin Soundclash.

Mangan returns at 6 p.m. on the Saturday evening to kick off the weekend. Bedouin Soundclash hits the stage at 1 p.m. on Sunday.