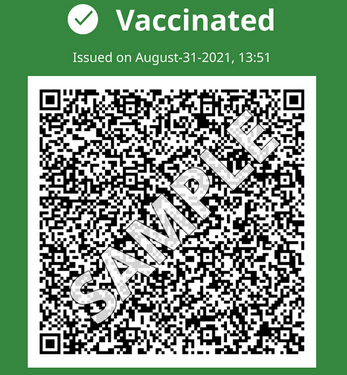 As of today, British Columbians need to present proof of COVID-19 vaccination, such as this digital version, to gain entry to many non-essential businesses, including licensed restaurants, theatres, gyms, and casinos.

As of today, British Columbians need to present proof of COVID-19 vaccination, such as this digital version, to gain entry to many non-essential businesses, including licensed restaurants, theatres, gyms, and casinos.

The pending introduction of the provincial vaccination card seems to have had a greater motivating effect in Rutland and West Kelowna than other areas of the Central Okanagan in convincing people to get a jab.

Vaccination rates in Rutland and West Kelowna have risen three points, to 77% and 81% respectively, since the government announced people would need the card to gain entry to many non-essential businesses and events.

The comparable uptick in the five other Central Okanagan regions where vaccination rates are tracked by the B.C. Centre for Disease Control has been either one or two percent.

And several areas of the B.C. Interior remain significantly below the average, with the vaccination rate just 66% in Enderby and 67% in the Kettle Valley region to the east of the Okanagan.

As of next Monday, people will need to present proof of vaccination status to get inside restaurants, movie theatres, casinos, and buildings where public services are provided.

They can download a digital copy from the new Vaccine Card website, at gov.bc.ca/vaccinecard, that went live on Tuesday. Or, until Sept. 26, present the vaccine confirmation paper slip they received when they got their jab earlier this year.

After Oct. 24, people will need to have had both vaccination shots to gain entry to non-essential premises.

What is your top election issue?