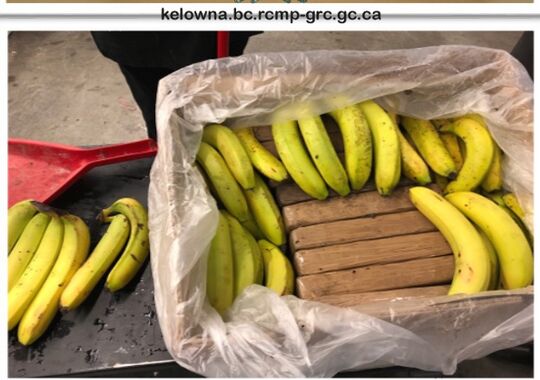 Twenty-one kilograms of cocaine was packed into banana boxes and inadvertently sent to Kelowna grocery stores from Colombia, police say.

The surprise shipments arrived at stores in Kelowna and West Kelowna on Feb. 24, 2019, but were only revealed by RCMP on Tuesday.

When they unpacked the Del Monte-labelled boxes and found 21 one-kilogram bricks of cocaine, staff at both grocery stores immediately phoned police.

"The drug section of the Kelowna RCMP Street Enforcement Unit worked collaboratively with Canada Border Services Agency to determine that these shipments originated in Colombia," RCMP Cpl. Jeff Carroll said in a release.

"Our investigation leads us to believe these illicit drugs were not meant to end up in the Central Okanagan, and arrived here as a result of a missed pickup at some point along the way," Carroll said.

The considerable quantity of "nearly pure cocaine" could have introduced more than 800,000 doses of crack cocaine into the drug market, police estimate.

No arrests have been made.